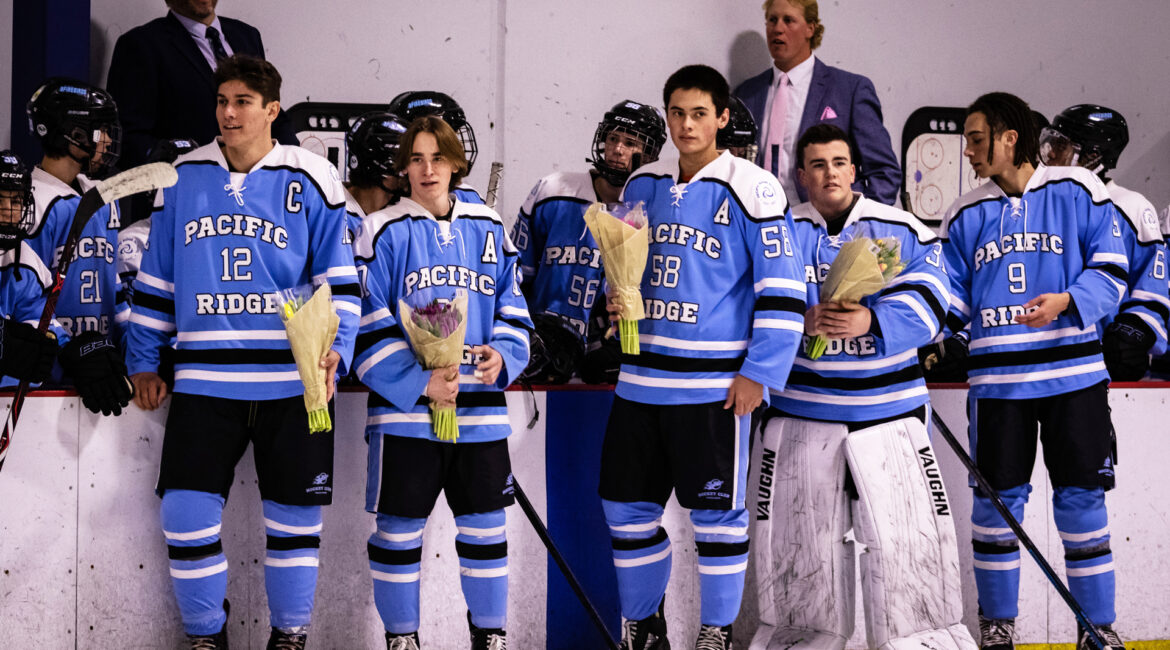 The Pacific Ridge Hockey Club finished the regular ADHSHL season with 4 games (2 JV and 2 Varsity) on back-to-back nights. The games kicked off at Anaheim Ice with the JV squad going up with an early release from school to beat the traffic to face off against Beach Cities. This was a tough game with no goals in period 1 by either team.  But into the 2nd, Soren Schillig found the back of the net early. The two teams settled back into a back-and-forth with both goalies playing well. Finally, midway into the 3rd, Malakai Lynch was able to figure out the puzzle that was Beach Cities goalie Michael Consolazio. Quinn Klaiber stood tall throughout the game, shutting down all attempts to score. Beach City pulled the goalie with 1:20 left in the game, and with just a second left in the third, Soren got his second of the game on an empty netter. Nice 3-0 shutout win for the JV squad!

Next up was the Varsity team, facing off with the Bellarmine Bells from Northern California. This game was played on the Olympic sheet in Anaheim and both teams found a lot of room to move. The Firebirds seemed to be a little out of sorts, having a quick penalty assessed in the first minute of play. As the Bells were setting up, Jack Cadieux jumped into the middle of a D-to-D pass and was off to the races, turning on the jets with a breakaway and finishing the task with a shorty. Then the teams got the physical play going, and it seemed the Firebirds were just not playing the way the refs wanted them to. The Firebirds were assessed 5 penalties over the next 15 minutes of play. As the dust settled from the penalty parade, the boys started to figure it out, first Tyler Sheridan on nice sprint down the wing with a beauty over-the-shoulder goal. Then Cole Sheridan found himself the recipient of a clean pass from Luke Stengler and again another snipe over the shoulder. But as soon as the Firebirds were getting things going, the penalty parade started up again, and this time after killing two 5-on-3s, the Bells were able to convert. As the period ended, the Firebirds were up 3 to 1, having killed off 5 penalties, 3 of which included 5-on-3s, and only allowing one goal against. The third period started out strangely, with a uniform change. As the home team, PRHC was wearing its Carolina Blue unis and the Bells were wearing white with Carolina blue trim. Coach Juan said it was still too difficult to tell who was who, so the boys switched into their road blacks and the 3rd period started. The two teams battled back and forth, and as with the first two periods, the Firebirds got into penalty trouble.  Finally, at the 5:34 mark, Ethan Kuhrt took a pass from Clayton Moore, stepped over the blue line and squeaked a shot through the wickets. From there, the wind seemed to come out of the Bells’ sails with Olin Silverman finding the back of the net 2 minutes later, and the Ethan potting his second of the night a minute later. The Firebirds secured the 6 – 1 win and went home to play the second set of games.

The Saturday night games were the two final games of the ADHSHL season and was also Senior Night for the team in Carlsbad IceTown. JV was up first, facing the Los Alamitos Griffins. The Griffins are a solid team and have a terrific goalie in Emilio Rodriguez. The game started out tight with a lot of back-and-forth, until late in the 1st with Colton Clapham getting one past Rodriguez. A minute later, Aiden Engels add to the lead. But the Griffins were not going to sit back, and with a minute-and-a-half left, they cut the lead in half.  The second period saw Los Al really push hard and the tide turned as the Griffins got 3 goals to set the table; 4-2 Griffins going into the 3rd. The Firebirds were not done and goals by Sahil Dube and Colton, with his second of the night, tied the game, which the final score at the end of regulation. At the JV level, to break the tie, you go right to a shootout. Both goalies played exceptionally well, pushing the shootout into multiple rounds. So many, in fact, that PRHC was down to the last few players on the bench. Sophia Chan was called out after 7 different ‘Birds could not find the back of the net. But Sophia was up to the challenge, and picked the puck up at center ice, worked down the right side and roofed a clean shot over the big Los Al goalie for the game winner! What a great goal and not only the game winner, but her first of the year and the last of the regular season. Nice job Sophia!

Next, we celebrated our Seniors with a short ceremony. This is always a great evening to celebrate the accomplishment of our players. We’re proud to provide a platform to acknowledge their representation of our club, and for them to say “thank you” to the parents who supported them throughout their youth hockey careers. We encourage you to check out the photos and video clips of the event.

After the festivities, the game got started. The Damien Spartans have been in the league for quite a while and have a rich history.  This season has not been one of their best, but you can bet they will come ready to play. The first period saw a lot of pressure from the boys, but they were not able to get one past Louie Garcia. While Louie is not your prototypical goalie of this age (he’s not 6-foot plus) his tracking of the puck and rebound control is exceptional. In the final seconds of the 1st, Damien on the PP was able to feed the puck over to the back door for a goal. Into the 2nd, PRHC again piled on the shots, but not until the 4:13 mark near the end of the 2nd did Olin Silverman finally figure out how to get one past Garcia. Unfortunately, a minute later Damien’s Matthew Augustine went end-to-end and fired one over Patrick O’Donnell for the second goal. With the 2nd period ending, the ‘Birds needed to come out hard to get the tying and go-ahead goals. Garcia saw a ton of rubber, and despite a massive 48 shots total, the Firebirds still came up short. A tough way to end the regular season, but giving motivation to the team as it goes into the ADHSHL playoffs.

Our Varsity team will head to Detroit on February 13th for playoffs in the NAPHL Prep division, and then will be right back at it for the ADHSHL playoffs on the 18th, facing off against Tahoe Academy. Finally, PRHC will play in the CAHA State playdowns for the right to go to Nationals in Dallas. These games start the weekend of February 28th, so there’s a lot of Hockey still left to play this season.