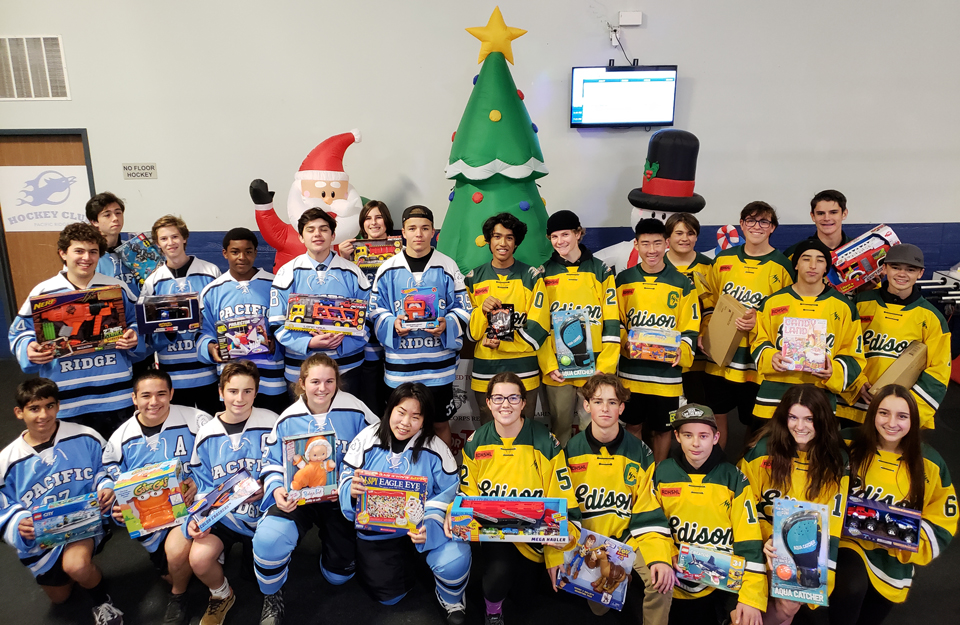 This past weekend the PRHC Firebirds had another great back-to-back set of games in IceTown Carlsbad.  To further make the night special, it was PRHC’s Annual Toys for Tots toy drive, when the teams bring in unwrapped gifts to fill up the toy bin provided by IceTown General Manager Fred Nelson to help those who are less fortunate during the holidays.

After the pictures and toys were handled, it was time to get down to business. JV was up first against the Edison Chargers. Edison is in a re-building year and as such is working to build a deep bench of prospects for the future. PRHC came out of the gate slow, but eventually found its stride, skating to a dominant 10-1 victory.  Standouts for the game were Colton Clapham and Dakota Castro, each with hat tricks.

Next up was the Varsity match with the Santa Margarita Eagles. SM has quietly been taking care of business all season and sits firmly in 2nd in the ADHSHL with 5 games in hand on 3rd place St. Mary’s. Out of the gate, things started well as Jack Cadieux found the back of the net off a nice feed from Aidan MacDonell. SM marched back a minute later and tied things up. SM was not done and found the back of the net again toward the end of the 1st on a nice goal from Aiden Cressy. Just when you thought SM would take a lead into the 2nd, Cadieux got his second of the game with 43 seconds left from another great tic-tac-toe play from MacDonell and Hayden Shoemake.

Both teams worked hard moving into the second, with the Eagles drawing first blood at the 13:08 mark on a nice goal by Marcus Kim. Again, the clubs battled it out, then late in the 2nd Kim would score his second of the night. Now the Firebirds had a hill to climb. It looked like they would go into the 3rd period break down by a score of 4 -2. But with a minute left in the period, Luke Stengler found the back of the net on a nice backhand to let the boys go into the locker room on a positive note.

The third period saw a lot of action, but no goals, and in the end the Eagles were able to fight off the PRHC onslaught to the buzzer. It was a good, solid game by both clubs, and we know the Firebirds are looking forward to their next meeting in Irvine, January 22nd.