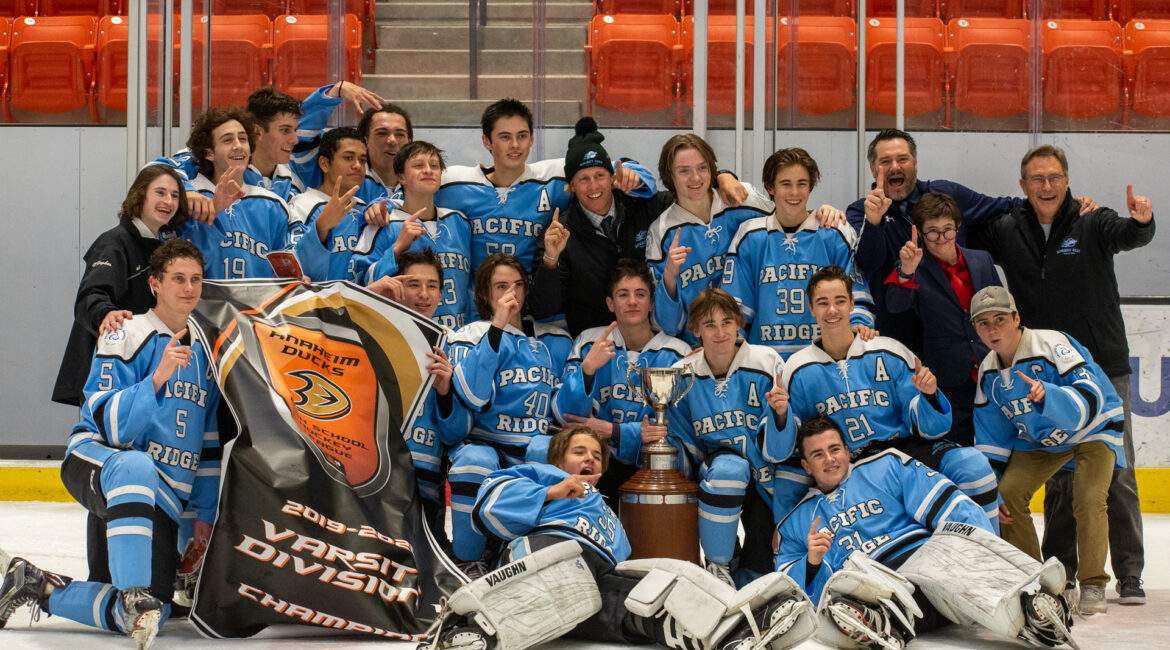 To say PRHC’s past week in the Anaheim Ducks High School Hockey League Division 1 playoffs was dramatic would be a massive understatement. In its first year in Division 1, the ultra-competitive top tier of the league, PRHC officially finished the regular season in a somewhat disappointing 4th place, based on the potential the team felt it had at the start of the season. This is a team that knew it had massive talent, but suffered from some lapses in performance and bad breaks during the season and felt it was time to rectify that situation. To show what they were really made of. And that’s just what they did, in a “4×4” run. 4 games. 4 goals each. With each game having its own dramatic story line.

Round 1 started with a game on Tuesday evening against Tahoe Prep, a team that finished at the bottom of the regular season standings, and that PRHC defeated in both meetings (6-0 and 6-4). Doesn’t sound like a lot of drama, right? Well, just hang on. Although the game started with a somewhat expected quick strike from PRHC with a goal by Ethan Kuhrt just three minutes in, Tahoe would answer quickly three minutes later. Toward the end of the period, PRHC went on the power play as Will Schneider, playing at the point for the special teams play, whistled one in from the high slot. Quickly into the 2nd, Tahoe prep tied the game once again, giving the feeling that they just weren’t going to go away. Just a few minutes later, Hayden Shoemake took advantage of traffic in front of the goal to put in another tally, with the Firebirds again taking the lead, 3-2. The two teams then went back and forth in a stalemate through the rest of period 2 and well into period 3, when Luke Stengler took matters into his own hands and netted a beauty to go up by two. Finally, some breathing room. But not for long. Three minutes later and Tahoe again put one in, bringing the score to 4-3. Were they ever going to go away? Now it was time for heavy pressure from Tahoe, including a power play opportunity, as they looked to tie it up and eventually pulled their goalie as well. But PRHC shored up its defense and held off its challenger. A move onto the next round, but a little too close for comfort.

After trouncing Damien 7-1 in round 1, Bellarmine Prep was next up, facing PRHC on Wednesday in the quarter-finals. While the Firebirds defeated the Bells in both of their regular season meetings (6-2 and 6-1), they are a small, but fast and dangerous team that was trending at the end of the season, narrowly beating both #2 Santa Margarita and #1 Orange Lutheran. The game started similar to the previous round with Will Schneider netting a power play goal early in the first period. But while PRHC had the momentum, the Bells’ fast pace was the answer, tying the game within two minutes. The Firebirds continued to press in front of the Bellarmine goal, as late in the 1st, Aidan MacDonell wheeled around in front, faked a pass and put it in on the goalie. The two teams then duked it out, fighting for an advantage, but it wasn’t until ten minutes into the 2nd that Bellarmine’s 5-time All-Star David Nguyen put one in to again tie the game. The teams fought tooth and nail through the period, each trying to gain an advantage, but no one could strike until five seconds left when Jace Phillips whizzed a rising wrister from deep past the Bellarmine goalie to take the one-goal lead into the between-period ice cut. While PRHC hoped to take this as a momentum-builder into the 3rd when the team heavily outshot the Bells, the only goal in the period was from Bellarmine, as the teams went to overtime tied 3-3. Despite yielding multiple chances to the Firebirds in the overtime period, Bellarmine held them off to take the game to a 3-round shootout to decide who would move on to the next round. Patrick O’Donnell stood tall in goal, stopping all three Bellarmine attempts, leaving the outcome to Jace Phillips who skated in with a slow approach to freeze the Bells goalie and suddenly ripped a shot 5-hole to capture the win. More drama. More heart palpitations fors the Firebirds fans, who would now look forward to what would likely be the team’s biggest challenge.

The next game, played on Friday evening, would bring on the supremely confident Orange Lutheran team, which was well-rested thanks to its automatic entry into the semi-finals, earned by being the top seed in the playoffs. The Firebirds and Lancers split their two regular season meetings, with OLu taking the first game 5-3, and then PRHC beating the previously undefeated Lancers in a dramatic 5-4 overtime victory (one of their only two losses all season). This is where the drama really started to build. With OLu bringing a fast, highly-skilled and well-coached squad, considered the favorite by many, and bringing with them a packed crowd of their local fans, the arena felt electric and hostile to the Firebirds. The team knew it would need to start fast and physical to contain the high-powered Orange Lutheran offense, and captain Clayton Moore made it his mission to stand player after player up, giving them pause every time they stepped over the blue line. Despite those efforts, OLu moved the puck aggressively for much of the first period, using their momentum to eventually sneak one past Patrick O’Donnell nine minutes in, getting the crowd heavily into the game and looking like a force to contend with. Of course, the best way to take the crowd out of it is to ram one down their throats, which Will Schneider did with two minutes left in the 1st. Even better is to do it again, which Jace Phillips did with a beautiful high-corner wrister from far out 10 minutes into the 2nd.  Not to be deterred, OLu put on plenty of offensive pressure, outshooting PRHC 18-6 in the period and eventually tied the game at 2 apiece toward the end of two. With the start of the 3rd period, OLu came out firing and got an early goal to take a 3-2 lead. Even with this goal, the momentum seemed to start to shift as the Firebirds put a strong forecheck to work, and started limiting the Lancers’ opportunities. With O’Donnell remaining stout in goal, the Firebirds started to create scoring chances, but the clock was running out and the Orange Lutheran fans were getting ready to celebrate. That only meant one thing: it was time for Clayton Moore to put the team on his shoulders, pick the puck up in the defensive end and slice through the other team to take a long, low wrister that he seemed to will in. With two minutes left, the game was again tied, the crowd was stunned, and the Firebirds were energized. The teams fought it out to the end of regulation, battled through a scoreless overtime period and once again came to a shootout. Let’s see if you’ve heard this story before… Patrick O’Donnell would face Thomas Stift, Ethan Hirst and Jackson Ferry, the top 3 scorers in the entire league. Again, he withstood all of them. Again, the opposing goalie stopped PRHC’s first two shooters and next up was Jace Phillips. And again, he showed he has icewater in his veins. Jace skated in, seemed to look 5-hole and then adjusted to a move by the goaltender, sending it up over his right shoulder to take down the top seed with yet another clutch shootout performance. Absolute pandemonium. The Firebirds were in the D1 finals.

Now all that was left was to face St. Mary’s Prep, the #6 seed coming into the playoffs. Doesn’t seem bad on paper. But this team is sneaky good. Good enough to beat PRHC 2 of the 3 times the teams played during the regular season. Good enough to shut out JSerra, last year’s D1 champs, in the first round of the playoffs. Good enough to beat the Capistrano Coyotes, last year’s D2 champs, in the quarter-finals. And good enough to beat Santa Margarita, last year’s D1 national champions, in the semi-finals. OK, so there was some potential for drama. And that potential showed in the first goal of the game. Despite the Firebirds dominating possession and dramatically outshooting St. Mary’s in the first period (10-1), it ended with the teams still scoreless. Into period 2, PRHC continued to outpace and outrace St. Mary’s, but in a scuffle in front of the net where Paddy got caught out, SM was first to strike, netting an undefended shot. Drama. But you could see on the boys’ faces that they were not going to let things go down this way. They were dominating the game, and now it was time for the scoreboard to show it. Back to work, back to putting pressure on them with a relentless forecheck and a solid wall of defense. And back to work with a ton of shots, including one from the point by Cole Sheridan that slipped in past St. Mary’s solid goaltender with a couple minutes left in the 2nd. Having just returned from a concussion, Cole’s presence was immediately felt, and got the ball rolling for the Firebirds. In less than 30 seconds, another goal came, this time by Luke Stengler with a wicked shot from the right circle that flew over the goalie’s shoulder. This was the momentum the Firebirds were looking for as they went into the 3rd period (especially after having outshot St. Mary’s 19-10 in the 2nd). Now it was time to shut this thing down. PRHC put a blanket over St. Mary’s, smothering them with stingy defense, backing them in a corner with an oppressive forecheck, and continuing to add offensive pressure. Halfway into the 3rd, Will Schneider showed patience and smarts, skating with the puck through the slot and outwaiting the goalie to put one in the top corner for a 3-1 lead, the first time the team was truly comfortable in the game. And then with 5 minutes left, Will did it again to pad the lead and start rolling downhill. Continuing to dominate possession, the Firebirds kept St. Mary’s out of scoring position until the final horn sounded, awarding the team with the thing they had sought all year: the Schulman Cup.

Massive congratulations to all the players, coaches and staff for a well-deserved victory, and especially for the players who have played their final ADHSHL games: Clayton Moore, Daniel Parizek, Kento Mencel, Tyler Sheridan, Ethan Kuhrt and Patrick O’Donnell, all of whom had outstanding performances in the playoffs. 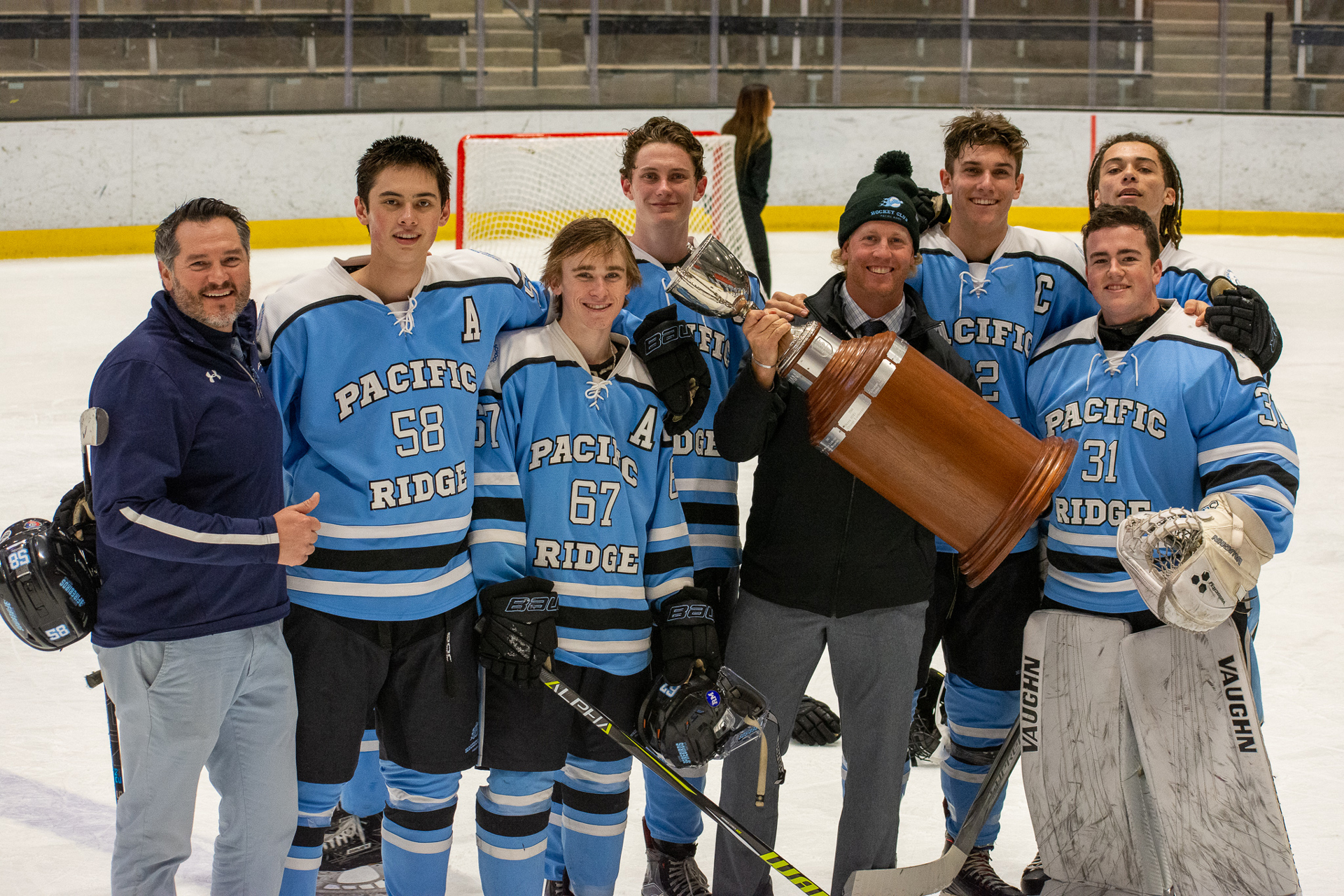 Now it’s on to the CAHA State Championships next weekend and a push to go to nationals!